This dress has caused a major confusion among  … Well, everyone. Since early 2015 this dress has been surfing the internet and creating chaos among households. Why? Because this dress is the magical color changing dress! For some they see white and gold, for others they see black and blue, and the rare bunch that can see both!

What do you see? Let me know in the comments below! I’m actually really curious.

Here’s the dress in question: What I learned is that it definitely has to do with our eyes and how we can see in the dark. How beautiful?

If you see black and blue your retina’s cones are higher functioning which results in your eyes doing “subtractive mixing”.

If you see white and gold your eyes don’t work very well in dim light so the retina rods see white making them less light sensitive which causes “addictive mixing” of green and red which make gold.

“When I look at the fluorescent bulb for a few seconds and then look at the dress again, the light blue becomes dark blue. So it might have to do with the state of rods and cones in our retina.”

So, my father and I were sitting together when we watched a little video about illusions and what have you. Then this dress came on the screen. We’re both like “eh, I don’t see anything… This video is boring” then I jokingly said “see white?” And laughed and he said confused “yeah! It’s obviously a white and gold dress” and I paused confused, but I realized my father is a funny guy and plays tricks on me at times. So, I didn’t even take it to heart really. Personally I thought he was playing a trick on me and joking around… But then I said “it’s blue and black” and he looked at me all confused. He thought I was pranking him!

My father and I decided to stop the video and looked this photo up. It was beyond belief confusing. I thought something was wrong with me, or maybe my father, or maybe both of us! Honestly I had a feeling of wanting to be right, and truly thinking my father must be losing it. So we looked, much to our relief we truly weren’t the only ones experiencing this and I found out the photo was taken of a blue and black dress in questionable lighting. But my father could not believe it was ever blue and black, and I couldn’t believe he didn’t believe it. I didn’t even really try to see white and gold, because I must be right, right?

So we did some tests. The dress when inverted colors… Was white and gold. I was confused. Truly and utterly.

So, I found this other picture online of the dresses in the perspective of those who see it as blue and black or white and gold:

Then my father said to invert this picture also, so we did … And….

Aaaaaah! But this didn’t really get us anywhere. It just made us more confused.

So we decided to zoom in on the colors individually:

After seeing those colors close up, my father said he kind of saw a blue tinge in the “white” section, and I realized I saw a golden tinge in the “black” section. This dress is an eye opener in so many ways. How many people started arguements over this dress until they realized there were different levels of truth in regard to this dress? Many. We are so very right that we forget to be aware as to the possibilities of different rights or different wrongs.

So tell me what happens when you look at this: 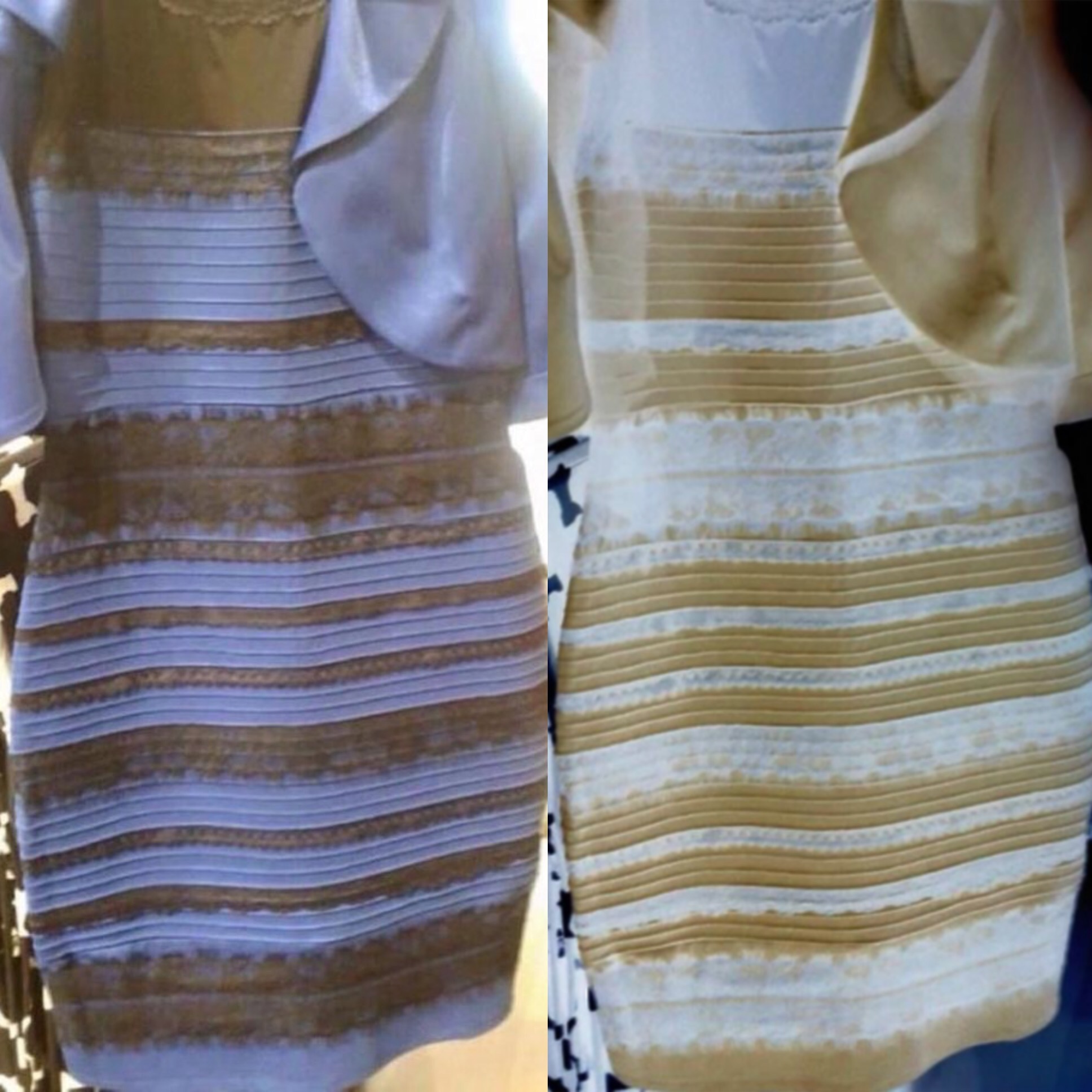 When I put the original (left) next to the inverted version, it starts to change (if you see blue and black) it to white and gold. Do you see that?

In fact when you look at this for a while, look at the original and you’ll see it start to turn gold and white.

Now lets do another test! Take a look at the original, but stare at it for around 30 seconds. Start to really believe it’s blue and black, it will start to turn. Look into the center of the dress. Keep staring. Now, the kicker is what happened to me…

I stayed up until 4am tonight, and by gosh I’m tired. So I thought, well, my cones and what not in my eyeball are probably different from when I was alert and not tired, so I tried to find a dress. I flipped through my phone to find it and I wondered where it went… Then after scrolling a few times up and down I realized that I completely missed the dress because it had turned white and gold! I kid you not! So… What’s going on?!

I then decided to focus really hard on the middle of the dress, despite being exhausted, and after a few seconds the dress slowly turned black and blue again. Then I let my eyes be tired, and after some time the dress became white and gold.

Now I can go back and forth to what ever one I’d like. But the weird thing is how certain I was it was black and blue and how certain my father was that it was gold and white. What a marvelous moment it was for me to realize no one was really “right or wrong”…. But experiencing it and seeing the white and gold as well, was eye opening.

How can we say we know this is right or that is right, when there might just be different levels of truth.

Maybe this will inspire you to realize we all see things differently, in more ways than one. I was able to see the dress in both perspectives, and let me tell ya… Neither is right or wrong. They’re both correct, depending on what your cones and rods are up to, how they perceive light. Like two people looking at God/Divine/Energy/Life as different beliefs , they might not realize they’re seeing the same beautiful energy just in different ways. Different perspectives, different facets of the same diamond, in the end we have to decide if we want to be blue black or white gold or just enjoy the dress. hat color is this dress originally? Well, the original dress is black and blue. But don’t worry, your eyes aren’t lying to you. They’re just seeing things differently from others, just with life. 🙂